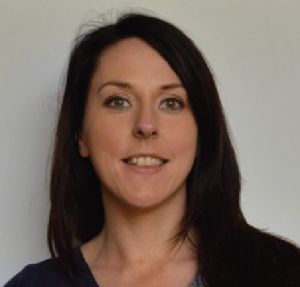 With Jane taking a well-deserved break this week, it’s my pleasure to introduce you to our wellbeing Wednesday topics today. As October is Substance Abuse Awareness Month we are bringing you lots of information about substance abuse and addiction. A complex topic that people often find difficult to talk about or approach, but one that really does deserve a spotlight.

About 11 years ago I lost a friend and ex colleague to accidental overdose. Following his death, myself and some of his other colleagues had many “what if” conversations. In hindsight there probably were some early warning signs about his increasing reliance on alcohol and prescription drugs, but it wasn’t like his behaviour changed overnight. It changed gradually over a long period of time until ultimately it became dangerous for him. We all had part of the story, but none of us were aware of the full extent of his troubles until sadly it was too late for him. Substance abuse and addiction really can have a devastating impact on the wellbeing of individuals affected and those closest to them. Nobody should feel the need to sweep it under the carpet. So I encourage you all to have a read at the materials.

Also on this week’s wellbeing Wednesday we have a book review from our very own Kay Owen. Kay was fascinated by a book she read recently that explored the link between movements, the brain and our emotions and kindly offered to do a review for us. For those of us who sit at a desk most of the day this is a must read. So, if you want to find out which activities can help boost your memory, lower stress levels and increase creativity, make sure you have a read.

As always, thanks for taking the time to read our Wellbeing Wednesday features and giving us your feedback.

October was first declared as National Substance Abuse Prevention Month in 2011. Since then, October has been a time to highlight the vital role of substance abuse prevention in communities and to remember those who have lost their lives to substance abuse, to acknowledge those in recovery, as well as family members and friends who are supporting them.

Studies show that the earlier an individual starts smoking, drinking or using other drugs, the greater the likelihood of developing addiction.  Studies show that 9 out of 10 people who abuse or are addicted to nicotine, alcohol or other drugs began using these substances before they were 18. People who began using addictive substances before age 15 are nearly 7 times likelier to develop a substance problem than those who delay first use until the age of 21 or older.

Not all substance abuse relates to illegal drugs. Prescription medications are different from illicit drugs in that they have legitimate medical purposes. The fact that the drugs are prescribed for real medical problems does not make them any less addictive than their illicit counterparts and unfortunately, prescription drug addiction is every bit as real as addictions to alcohol and illegal drugs.

In the UK, the most commonly abused prescription medications include opiates such as Codeine or Fentanyl, anti-depressants, sleeping pills and anti-anxiety medication. Addiction may occur following legitimate use of the drug, for example where pain medication has been given after surgery.  When patients take their medications in ways that go beyond their doctors’ instructions, tolerance and eventual addiction can be the result.

Many people don’t understand why or how other people become addicted to drugs. They may mistakenly think that those who use drugs lack moral principles or willpower and that they could stop their drug use simply by choosing to. In reality, drug addiction is a complex disease, and stopping drug use usually takes more than good intentions or a strong will. Drugs change the brain in ways that make giving up hard, even for those who want to. Fortunately, due to research, we now know more than ever about how drugs affect the brain and what treatments are most effective to help people recover from drug addiction.

What is drug addiction?

Addiction is a chronic disease characterised by drug seeking and use that is compulsive, or difficult to control, despite harmful consequences. The initial decision to take drugs is voluntary for most people, but repeated drug use can lead to brain changes that challenge an addicted person’s self-control and interfere with their ability to resist intense urges to take drugs. These brain changes can be persistent, which is why drug addiction is considered a “relapsing” disease—people in recovery from drug use disorders are at increased risk for returning to drug use even after years of not taking the drug. 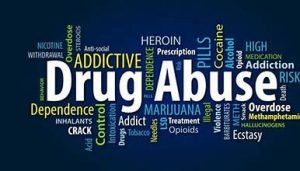 It’s common for a person to relapse, but relapse doesn’t mean that treatment doesn’t work. As with other chronic health conditions, treatment should be ongoing and should be adjusted based on how the patient responds.  Treatment plans need to be reviewed often and modified to fit the patient’s changing needs.

What happens to the brain when a person takes drugs?

Most drugs affect the brain’s “reward circuit,” causing euphoria as well as flooding it with the chemical messenger dopamine. A properly functioning reward system motivates a person to repeat behaviours needed to thrive, such as eating and spending time with loved ones. Surges of dopamine in the reward circuit cause the reinforcement of pleasurable but unhealthy behaviours like taking drugs, leading people to repeat the behaviour again and again.

When a person continues to use drugs, the brain adapts by reducing the ability of cells in the reward circuit to respond to it. This reduces the high that the person feels compared to the high they felt when first taking the drug—an effect known as tolerance. They might take more of the drug to try and achieve the same high. These brain adaptations often lead to the person becoming less and less able to derive pleasure from other things they once enjoyed, like food, sex, or social activities.

Long-term use also causes changes in other brain chemical systems and circuits as well, affecting functions that include:

Despite being aware of these harmful outcomes, many people who use drugs continue to take them, which is the nature of addiction.

Why do some people become addicted to drugs while others don’t?

No one factor can predict if a person will become addicted to drugs. A combination of factors influences the risk of addiction. The more risk factors a person has, the greater the chance that taking drugs can lead to addiction. 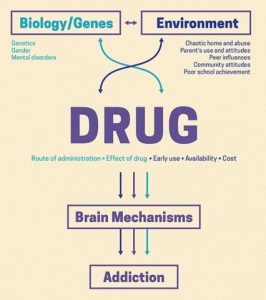 Biology.
The genes that people are born with account for about half of a person’s risk for addiction. Gender, ethnicity, and the presence of other mental disorders may also influence risk for drug use and addiction.

Environment. A person’s environment includes many different influences, from family and friends to economic status and general quality of life. Factors such as peer pressure, physical and sexual abuse, early exposure to drugs, stress, and parental guidance can greatly affect a person’s likelihood of drug use and addiction.

Development. Genetic and environmental factors interact with critical developmental stages in a person’s life to affect addiction risk. Although taking drugs at any age can lead to addiction, the earlier that drug use begins, the more likely it will progress to addiction. This is particularly problematic for teenagers. Because areas in their brains that control decision-making, judgement, and self-control are still developing, teenagers may be especially prone to risky behaviours, including trying drugs.

Can drug addiction be cured or prevented?

As with most other chronic diseases, such as diabetes, asthma, or heart disease, treatment for drug addiction generally isn’t a cure. However, addiction is treatable and can be successfully managed. People who are recovering from an addiction will be at risk for relapse for years and possibly for their whole lives. Research shows that combining addiction treatment medicines with behavioural therapy ensures the best chance of success for most patients. Treatment approaches tailored to each patient’s drug use patterns and any additional medical, mental, and social problems can lead to continued recovery.

For more information and access to support and advice the following sites may be helpful:

Move! The New Science of Body Over Mind by Caroline Williams 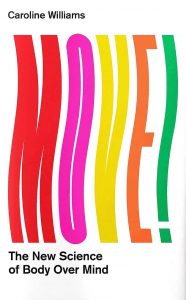 I found this book via a news article about how signals from your body can impact on how you think or feel – a variation on the saying ‘mind over matter’. The author presents research that has explored the connections between our body and our brain and that how we move our body has a significant amount of impact over how we feel. Also that different types of exercise can stimulate different functions, for example lifting weights can boost your memory, working your core reduces stress and walking can help with creativity.

A section I found particularly interesting proposed that as we evolved to hunt and gather, when we put weight on our feet by standing and moving, signals are sent to the brain that our cognitive functions need to be working to help us look for food and be alert to danger.  The alternative being that when we are still, our brain functions are not being fully exercised. This made sense to me from seeing the rapid decline in elderly relatives when a fall or illness has left them bed-bound or inactive for long periods.

There’s also some really interesting information about the benefits of stretching on our organs, not just our muscles through yoga or similar. It has made me appreciate the benefit of taking walks during the day and breaks away from my screen, particularly if I’m feeling sluggish late afternoon! I found this an enlightening, timely and well written book and I found myself often pausing to tell my other half about an interesting fact I had just read! One thing however I’m not keen on if I’m honest is the use of animals in scientific research, which is referred to in this book. In fairness it is handled sympathetically by the author, but still sits uncomfortably (pun not intended!) with me. 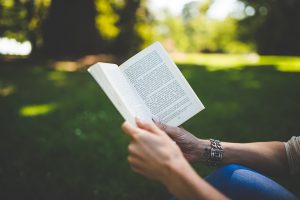 can feature your review.

We have also had a query about a book club for council employees, if you know of any we’d love to hear about it and pass on your details.

Alternatively, if you are interested in helping to get one started, please let us know and we can put you on touch with other like-minded readers.