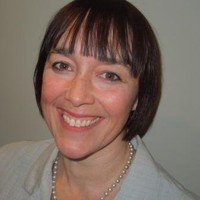 Hello everyone and welcome to this week’s edition of Wellbeing Wednesday.  Today we are celebrating the bicycle, caring and cats!

It is cycle to work day tomorrow and so we have included some encouragement, hints and tips to how to cycle safely and enjoyably.  Having cycled to school (many, many years ago) and to work in Glasgow, and then lost the cycling bug through my 30s and 40s (children, Argyll weather, busy roads, uncomfortable/old bike…) my husband has cajoled me over the last couple of years to get back into it – and has been remarkably patient as I found every excuse under the sun not to go out/not to cycle too far/not to cycle up hills/not to cycle THAT road etc etc.  But with a more comfortable bike now and some miles in my legs, it is amazing how quickly it becomes a pleasurable activity – and you can do it with friends! Thank you to everyone (you know who you are) who has put up with me stopping to push my bike up hills/tracks when they could have gone twice as fast.  Give it a go – it’s fun – honest – and loads of cycle routes in Argyll have the most excellent tea and cake shops somewhere along the way.

We’re also highlighting a survey for carers this week – so please fill it in and pass it on. This information will inform the development of carers’ rights.

And finally cats. People do have a tendency to make a distinction between ‘cat people’ and ‘dog people’ – I am definitely the former. It’s their independence that I like, and their (apparently) calculated disdain for humans – the human/cat relationship is very much on their terms. So our resident cat lover in the Wellbeing Team, Julie Hallett, has highlighted some of the health benefits of keeping a cat – and has shared some beautiful pictures of her lovelies.

Before I close – a quick reading update for any of you who are still interested (my new year’s resolution was more reading/less screen time).  Consider the Lilies by Iain Crichton Smith – a poignant exploration of humanity in the face of cruelty and hardship during the time of the highland clearances.  A little gem of a book.

And linking to our cycling theme, Dervla Murphy, who died earlier this year, an intrepid (and unstoppable) Irish cyclist who has written engaging, at times hilarious and highly astute travelogues – I’m currently with her in Siberia on the BAM train (Baikal-Amur Line) in Silverland, having previously read between River and Sea.  Highly recommended.

See you next week. 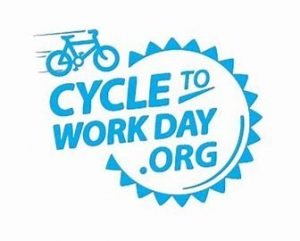 Cycle to Work Day sees millions take to the saddle each year, with everyone joining forces to celebrate this undervalued form of commute. The one-day event takes place on the 4th of August and has been running for ten years this year. The day encourages commuters across the country to reap the benefits of cycling in the workplace and beyond.

Cycling to work contributes to a greener planet, saves you money spent on petrol or public transport and helps you get fit in the process. Many also find that cycling to work helps them feel motivated and energetic throughout their workday.

If you’re thinking of getting involved this year, here are some tips on preparing for Cycle to Work Day, whether you’re an avid cycle enthusiast or want to try something new!

Doing something out of your comfort zone is a great way to boost your confidence. But you don’t have to go it alone – encourage your colleagues to get involved too. You could even take it a step further and look for local bike routes near you. For employees looking to do something together this summer, cycling to work could be a great option to promote team building and create a happier, healthier workforce.

Don’t hop on the road in the morning without checking your bike is in good working condition. Give the tyres a pump if they need it. Check the breaks are working. Twist the gears to see if they are still moving. Bikes left in storage for a long time tend to get rusty, so it’s best to give them a once-over before you hit the road. All it takes is two minutes to ensure you’re safe, steady and ready to get peddling.

Safety is always the priority. Make sure you have a helmet that fits properly. Helmets are essential and help you enjoy the ride without worrying about any injuries. Reflective gear like a hi-vis vest or fluorescent strips for your bike can be good for visibility. Bright colours can help on rainy or cloudy days when it’s more difficult to spot cyclists on the roads. 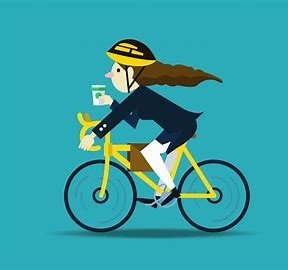 Before speeding off, it’s a good idea to plan your route. It might not be the usual commute you take to work – so familiarise yourself with the kinds of roads you’ll be passing. You might want to pick a route that has wide, flat roads to make it a little easier on the legs (easier said than done in Argyll and Bute!).

Finally, enjoy it. It’s not every day you get to boost your mood, boost the planet and boost the funds in your wallet. Happy riding!

Are thinking about buying a bike?

Argyll and Bute council’s employee benefits scheme provides both a cycle to work benefit and bike shop for eligible employees.

The State of Caring Survey 2022 was launched last week and helps to provide information and evidence to inform Carers UK and Carers Scotland campaigns and to secure new rights for carers throughout the country.

This survey is aimed at current (and former) unpaid carers who look after a relative or friend who is disabled, older or seriously ill. If this applies to you, please consider completing the survey, or pass on to someone you know who is, or has been, caring for someone. 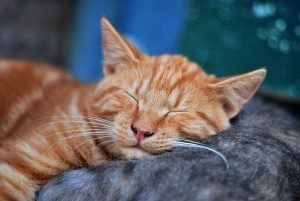 International Cat Day is a celebration which takes place on 8 August of every year. It was created in 2002 by the International Fund for Animal Welfare to raise awareness for cats and learn about ways to help and protect them.

We are taking inspiration from this celebration of all things feline to explore the wellbeing benefits of owing a cat.  Cat ownership is good for you, it is official! There are a number of health benefits of cat ownership, some of which have been scientifically proven, while others have long been known about by those who love cats. Here are a few:

A study in Minnesota* showed that people who own cats have around a 30 – 40% less chance of dying of a heart attack or stroke. This may be due to the fact that cats are known to lower stress levels – see later point here – or for some other reason, but it is definitely the case. Recent research has shown that the frequency of a cat’s purrs has been shown to be medically therapeutic in a number of ways, so this probably contributes to heart health *Cat ownership and the Risk of Fatal Cardiovascular Diseases. Results from the Second National Health and Nutrition Examination Study Mortality Follow-up Study. – PMC (nih.gov)

Cat owners know that cats are great companions, and this is particularly the case for those who live alone, who are very grateful for the companionship of the cat waiting at home for them. A Swiss study showed that having a cat was similar to having a romantic partner in this respect!  Having a cat to talk to during difficult times can be really valuable and the routine of having to care for a pet can help to normalise traumatic periods such as after a bereavement.

Owning a cat is soothing, and stroking a cat can trigger the release of chemicals which can greatly reduce anxiety and stress. The frequency of a cat’s purrs also seems to reduce anxiety, though the exact mechanism involved is not clear. Cats are very good at knowing when their owners need comfort and will often stay close to them when they are unwell or distressed.

Several studies and polls have shown than people think that they sleep better if they have their cat with them. Research shows that there may be really something in this. A study conducted at the Mayo Clinic Centre for Sleep Medicine showed that 40% of people slept better because of the presence of their cat, though a smaller number did say that the presence of the cat led to sleep disturbances. Of course, a cat leaping all over you at night is not conducive to good sleep, but a purring cat snuggling up to you…that is a different matter, as many of us know.

This is not something which has been scientifically proven but there is some anecdotal evidence of cats helping children with autism. People with autism can have difficulties with communication, and in some cases they may be able to communicate with a cat more than with other people. This has also been used in a form of therapy in which autistic children are taught to communicate using a cat. 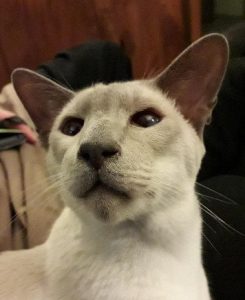 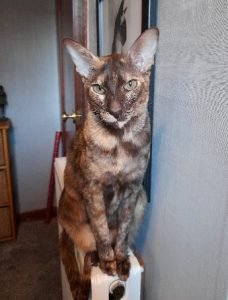 Whatever the scientific evidence for the above, most people who share their lives with a cat will agree that living with a cat enriches their life and helps them feel better during difficult times.  Having lived with cats all my life (including this beautiful boy and girl here), I can also add that they make you laugh every single day, frequently drive you mad, create more mess than would seem possible from a small animal and break your heart when the time comes to say goodbye, but I wouldn’t change a thing!